A positive aspect of the social networks is the fact that we take a glimpse into other cultures and places throughout the world and talk to people with a different background. It is indeed very enriching, and it provokes some awkward situations as well! For instance, a young fellow from India, Vivek Singh, asked me about the history of his country before the East India Company poked its nose in there. It made me feel embarrassed to acknowledge my ignorance, as I explained to him how in the western countries – as stated by Walter Benjamin: “History is told by the victors”- we are only taught history when/only as much as it involves western people, and western versions of it only. I feel we have a huge gap in our knowledge, no wonder we may behave as hillbillies when we encounter cultures and behaviours different to ours. 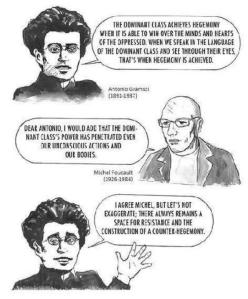 I resorted to Ravi Kumar (www.hindicenter.com), who sent me some bibliography on colonial and post-colonial contexts in translation. I tried to fill the gaps by researching a bit and trying to reflect in order to answer Vivek Singh’s question: why were the colonial incursions in America and India so different?

We could say that time was an important factor, as more than one century separates both invasions. The way they happen was also particular to each of them; the Spaniards assumed to role of “gods” and took over, plundering, raping and erasing entire cultures with their microbes and swords alike. The British disguised it as commercial intentions only, while they publicised it as a “christianising enterprise” in their homeland. Their intentions were not as bare faced as that of the Spaniards’ because Indian society was very much developed, organized and sophisticated already, so they could not get away so easily. 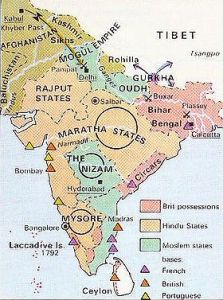 They landed at Surat in 1612 with the permission of prince Khurram, who allowed them to trade there. A hundred years after that, in 1712, empires within India crumble, there are uprisings and invasions from Persia and Afghanistan. The East India Company take advantage of the invasions effected by other countries and the vacuum of power by the death of Aurangzeb (1707) to impose their own idea of an empire, displaying their own private army and plan to take direct control over the land in order to increase their profits. In the battle of Plassey (1757) they fight against the forces of the Nawab Surajudduallah of Bengal, backed by France -out of their own self-interest, I guess-. The Indian side fails, due to Surajudduallah’s General Mir Jafar’s treachery, who was made the new ruler of Bengal by the British as a reward for betraying his own fellow citizens -that sounds familiar throughout history, doesn’t it?-.

The Indians started to build alliances in order to better fight the British. In 1764, Mughal emperor Shah Allam II allied with Mir Qasim -Mir Jaffar’s son, who had turned against the British rule- and Shujaudduallah -ruler of Awadh- to expel the Brits. It results in another failure, in the battle of Buxar (1764); they were allowed to rule their areas but forced to acknowledge the East India Company as administrator.

The company started becoming a political force and its ambitions to gain control of India started to be obvious. For the next year they exerted their power through a combination of diplomacy and sheer force. By 1840 India was under its rule. The company exploited Indian resources, started introducing Christianity -which they were advised not to do during the first stages of their sojourn-, and developed an increasingly aloof, arrogant and racist attitude. They also introduced their language, a fact which is one of the basic and most common weapons used by colonialism. Indian craftsmen became ruined, as the Europeans living in India introduced cheaper products from British factories -a phenomenon which is also familiar nowadays, but the other way round, impulsed as well by the Europeans’ outsourcing-. The British established a kind of “apartheid” which resulted in the higher rank posts being reserved for their own kind. They also introduced the Doctrine of Lapse, allowing themselves to annex any land whose ruler died or which did not have a male heir -of course they practised gender apartheid as well-. India became an important site to exploit for Britain, thus Queen Victoria became the official ruler.