Written by the Nigerian author Ben Okri in 1991, this magical realism story delves into the harsh life conditions in a Nigerian ghetto during the British colonial rule and the world of spirits, which mingles with day-to-day reality.

Azaro is an unborn child who lives with his spirit companions in a world of their own, where they are free from the heartlessness of the human beings, from injustice, unfulfilled longings and the fear of dying. In fact that’s why babies cry when they are born and severed from the world of spirits.

As these unborn children approach their next incarnation, they make pacts with their spirits companions that they will return at the first opportunity. However, if they break these pacts, they will be assailed by hallucinations and haunted by their spirit companions. The unborn children who make these pacts are known as Abiku or spirit children and thay keep coming and going, dying and rebirthing, often to the same mother, causing great suffering in the family.

(Picture: The Abiku children used to be marked with razors)

Contrary to other babies, Azaro is born smiling and, despite his pact with the spirits and the hardships ahead of him, he changes his mind about his pact, decides to make his mother happy by staying and clings to life. His zest for life is greater than any threat or any fear, greater than the spirits’ constant harassment and their repeated murder attempts to have him back in their world. There’s a dichotomy between not wanting to get born at all, knowing for sure that there will be suffering, and wanting to live it all, with innocence and an open mind. 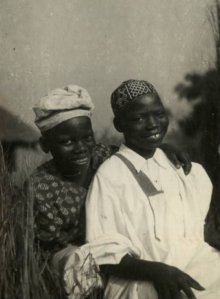 As an Abiku child, Azaro is half-way between both worlds, and sees things that nobody else can see. His world is populated with akward characters, albinos and people with weird deformities who are not really human beings, but spirits who have borrowed bits of human beings to partake of human reality: life, sex, alcohol… He encounters many of these spirits when he is at Madame Koto’s bar, where he is ’employed’ by the tough and imposing woman as a ‘lucky charm’, although in the end he seems to attract spirits and drive the regulars away.

Everyday, Azaro goes back to an extremely humble home populated by rats and mosquitoes and swarming with creditors and to his father’s fits of rage after being exploited all day. His father gets into fights, gets sacked and then work under deplorable conditions, both physical and ethical, since the boss asks the workers who they are going to vote for before letting them carry his loads.

The political arena is equally disappointing, with the politicians only interested in getting votes. The world of politics is satirically polarised into the Party of the Rich and the Party of the Poor. During their campaign, some representatives of the Party of the Rich, together with their thugs and the landlord appear in a van to deliver their speech, but people living in the poors’ quarter don’t fall for their deceiptful rhetoric and ridicule them. After receiving a ‘gift’ of rotten powdered milk to conquer their votes, the bash the politicians and burn their van.

This novel displays several different layers of existence, whether social, political, religious, cultural, colonial or spiritual; all of them woven together but occupaying different spaces at the same time, and which we see from the point of view of this peculiar and endearing child who faces every challenge without drama.