The contact between Latin and Old English started before Anglo-Saxon came to England, since Germanic tribes had already acquired many Latin words. The population also learned  Latin words from the Celts. A century and a half later, Roman missionaries introduced Christianity and an extensive adoption of Latin took place.

In order to determine the period when each borrowed word entered the language we must resort to different kind of evidence or varying value. For instance, if a word occurs in texts such as Beowulf or Cynewulf it indicates that it came into English not later than the early part of the period of Christian influence. However, we cannot be sure how much earlier it was acquired, since the first records belong to the year 700. Some words are not recorded before the 10th century (pīpe– pipe, cīese-cheese), so they can be assigned on other grounds to the period of continental borrowing. In order to establish the date when a term is acquire with resort to the following clues;

The first Latin words acquired by Old English come from the contact between Latin and the Germanic tribes in the continent. There are hundreds of Latin borrowings in Germanic dialects. In the 4th century, the Germanic population was formed by several million people belonging to all ranks and classes of society. The populations close to the northern border were the most numerous; there were Christian churches set in military roads and trade with the Romans. The Germanic tribes adopted words from the more advanced Roman civilization and they were later adopted by Old English. Thus we find the following words from Germanic transmission; 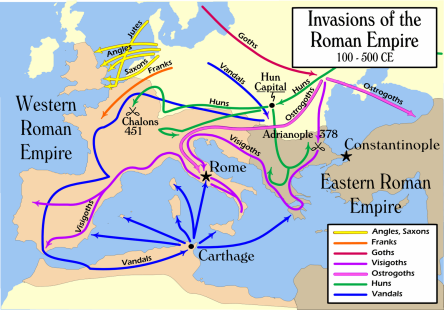 Words through Celtic transmission; as we have noted in the previous blog entry, there are a considerable amount regarding place-names. An important word -in terms of subsequent word-formation- that the Celts borrowed is ceaster, from Latin castra and it is very common in toponyms; Chester, Colchester, Dorchester, Manchester, Winchester, Lancaster, Doncaster, Gloucester, Worcester. Some of these places were Roman camps, but not all of them. The English attached it freely to a place intended for habitation.

Source: A history of the English language

The dialects brought by the Jutes, Saxons and Angles interacted with the languages spoken by the Celts, Romans and Scandinavians.

In the case of the Celts it is apparent that they were not totally exterminated except in certain areas. A large number of them was assimilated into the new culture. The Anglo-Saxon Chronicle narrates the struggle between natives and the new-comers, and the fact that Britons were annihilated certain in areas such as Andreceaster or Pevensey, although this is an exceptional case. In the East and South-East the Germanic conquest was fully accomplished with fewer Celtic populations left. A large number of Celts fled to the West, where we can find a considerable number of Celtic toponyms. Among Celtic place-names we find;

A few Latin words were borrowed during the Roman occupation and are sometimes combined with these Celtic terms; castra, fontana, fossa, portus, vicus.

Outside of place-names the influence is almost negligible. There is only a score of Old English words which can be traced back to a Celtic source within which we find to distinct groups; words learned by the Anglo-Saxons through everyday contact with natives, transmitted orally and words introduced by the Irish Christian missionaries, which have a religious nature.

Source: A History of the English Language.