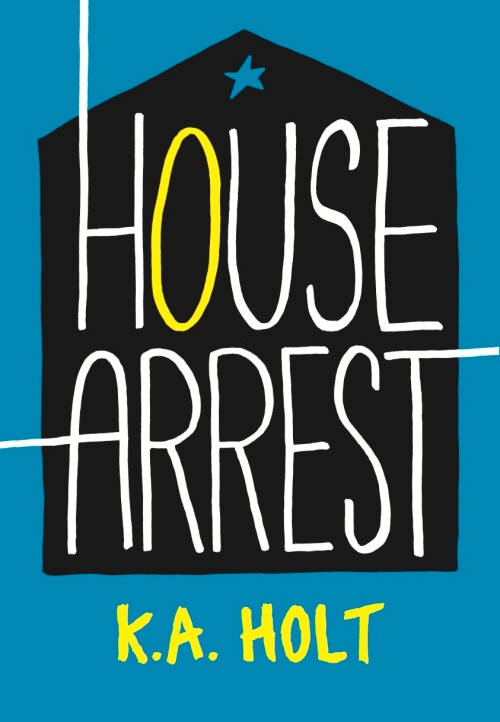 Sometimes, bad things happen. It’s not your fault, and it’s not something you can control. These whirlwinds and riptides grab hold of you and so you grab hold back, trying to keep air in your lungs as you are whipped along.

Bad things happen when you’re young and old. They happen when you’re rich and poor. They happen to girls and boys. There is not one person alive on this earth who hasn’t experienced a bad thing. This should give you comfort, and yet, when the bad thing has you in its grip you feel like you’re all alone. You feel as though no one in the world could possibly understand the pain and terror you are experiencing. You are the only star in the universe, and a black hole has you, and what do you do? What can you do?

You can know you’re not as alone as you…

You are very talented and sincere as well -not a very common quality in this world we are working and living in, as everyone seem to have been born with a top notch position. I’m starting from scratch as well and it’s something that I value very much in others, as I know it’s hard and not always recognized and it takes a lot of courage among many other things.

Sharmishtha Basu is an unemployed artist, writer who is out to test her works , eagerly looking forward to meet publicists, literary agents and huge-hearted readers, to see if they can help her to build an “unorthodox” career, a path followed by many before, some has been blessed with success, most have not, let us see what you make of her attempts! A failure or success- it all depends on you. These are pieces from her book, the book is available on createspace and amazon-

The Lotus of fire 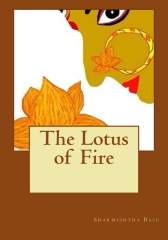 There are almost as many translation agencies on the Internet as there are translators.

How can a potential customer find an honest, hard-working and knowledgeable translation company, translation agency, or translator before the inevitable happens and an important translation project is botched and disfigured beyond all recognition?

I think that there are several reliable signs that one can look for in order to weed out fake outfits when looking for a competent provider of translation services, because competent and reliable translators and translator agencies do exist as well.

I decided to create a list of misleading, ludicrous and…

(Note: I will be discussing brain-related disabilities, because I am not confident enough in my opinions on physical disability to be sure this model is useful. I am going to be interchangeably using “neurodivergence”, “brain weirdness”, etc. This post is intended to be inclusive of intellectually, developmentally, learning, and psychiatrically disabled people.)

It’s important to note that– even if your map is accurate– the process of making a map loses information. A map of San Francisco doesn’t include…

Beech (Fagus Sylvatica Lynnaeus) is a species of beautiful, deciduous tree, with a smooth, greyish bark, native to certain parts of Europe -with a warmer climate-, Asia and North America. Its leaves are loosely toothed and hairy in spring, and the tree bears both male and female flowers on the same specimen; the small ones are unisexual, the female flowers bloom in pairs, and the male ones are anemophilous aments (cylindrical clusters of very tiny flowers). Flowers are produced in spring, once the leaves have already appeared. Its fruits (beechnuts) are edible and have a high tannin content. In the autumn, if you are trekking in the forest, it is easy to see the brown dried beechnuts on the ground. We call this tree haya in Spain, and the fruits are known as hayucos.

The name of the tree (Latin fagus) is of Indo-European origin, and played an important role in early debates on the geographical origins of the Indo-European people. And that is the aspect of beech trees that interests me today.

Within Europe, the common beech is restricted to central Europe, and it is not native east of Poland and Ukraine. The two main branches of Indo-European fall in either side of the line drawn by the imaginary line from Scandinavia to Greece -the Fagus line-, which splits Europe in two. Those two branches are known as the Centum group -the name comes from the word for “one hundred” in Latin- and the Satem group -from “one hundred” in Avestan-. The Centum group, West of the Fagus line, comprises Hellenic -although Greek φηγός, from the same root, was transferred to the oak tree (e.g. Odyssey & Iliad) as a result of the absence of beech trees in Greece– Italic, Germanic and Celtic. The Satem group comprises Indian, Iranian, Armenian, Balto-Slavic and Albanian.

The Fagus line theory depends on the existence of beech trees in the area as evidence by the vocabulary. For instance, in the Centum area, there are no ancient work for elephant, camel, lion, tiger or bamboo, but there are terms for freezing cold, oak, beech, pine, birch, willow, bear, wolf, otter, beaver, polecat and bee.

There is an exception though, Tocharian -belonging to the Centum group, as fragmentary texts have been found in West China. Nomads? Immigrants? A flawed theory?

I love Margaret Atwood.  I would say that I was her biggest fan, but I suspect that line of thinking would descend into a childish competition with other rivals to the claim.

In honour of Atwood’s new book, ‘The Heart Goes Last’, I’ve decided to take stock and share my top 5 Atwood novels.  This is a list of personal favourites and the criteria has been simple: which books do I re-read most often.  You’ll see that this has meant a certain wonderful novel has been left off the list because, while I will never dispute it’s genius, I rarely re-read it and it’s certainly not an old friend in way my chosen five truly are.  Also, because I never want to live in a world in which there are no new Atwood novels for me to read,* I’ve started to ration myself when it comes to her recent publications…

Born in Minessotta in 1885, Sinclair Lewis was the first North American writer to be awarded with the Nobel Prize in Literature, in 1930. His works are X-ray pictures of the American Dream and its ruthless capitalism between the wars. His views can turn out to be extremely modern, as he depicts working women to perfection, in portraits full of respect and dignity, disregarding social class. After graduation in Yale, he had several different jobs and wrote in all kind of styles, from pulp novels to stories for magazines. He even sold plots to Jack London, such as The Assassination Bureau, Ltd., London´s unfinished novel. He was an alcoholic and was interned in Austen Riggs Center in 1937. He died in 1951 from advanced alcoholism. I have always wondered how could he become an alcoholic during the Prohibition!

His first great success was Babbitt, written in 1922. Set in a fictional town, Zenith, where George Babbitt – a villager by birth and a foster son of Zenith – wishes to embody the exemplary successful Zenith man, with not an inch of Catawba – his village- in him. Babbitt is proud of himself and what he has achieved in life, by walking upon the well-trodden path. His life, given his materialistic spirit, is described in terms of what he possesses: a nice car where he can even fit a modern lighter, a house worthy of a decorations and interiors magazine – which does not feel like home, though -, his suits… Babbitt is the embodiment of capitalism itself in his daily life: he speculates with properties for a value exponentialy greater than their real one. He doesn´t care for community values, even though he pretends he is a moral man, as his speculative deeds have a negative impact in his beloved community.

Whenever Babitt has to express a personal opinion about any topic, he needs first to research the approved and official sources: the Advocate Times, the Evening Standard and the Chamber’s newsletter as well as learning about the decisions taken by the Republican senators in Washington. They guide his thoughts and opinions and he finds it difficult to have an opinion about something which hasn´t yet elicited an article on one of these sources. As soon as he reads the opinions included in the aforementioned papers, he finds himself able to express his individuality – his favourite page in those papers is the Mutt&Jeff cartoons, though – . His beliefs and his morals are equally dictated by the Presbyterian Church. 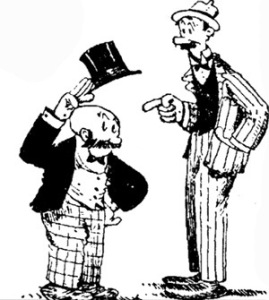 Sanctimounious Babbitt is relieved that prostitution, speakeasies and other illegal activities are restricted to certain ghettos in town, so that “decent families”can feel safe. But there is a high degree of hypocrisy in this statement, provided that, when he organises a party with his friends, he goes to one of this ghettos and buys alcohol for the occasion.He and his friends talk about the Prohibition Act, implying that it is justified, so that those consumers who can’t really afford it do not get tempted, but they feel that it thwarts their freedom as middle-class citizens who can pay for beverages and lead exemplary and productive lives.

Babbitt’s closest friend, Paul, breaks the former’s peace of mind -only interrupted by a recurrent dream – with his questioning the kind of life they both lead. Paul talks about the lack of a sense of purpose in life, about boredom and frustration in married life, which makes him feel trapped and disappointed after living by the rules as a good boy all his life. Babbitt does not love his wife, either. He never really did, although he is sometimes able to feel tenderness towards her. When they first met, Myra was a “nice” girl who didn’t allow him to kiss her and the first time he did, she assumed that they were engaged. He wasn’t able to say no. Married life was comfortable for him, though. Thus, as a self-righteous person, he reacts in a somewhat paternalistic manner to that, only to start questioning his own life afterwards:“Whatever the misery, he could not regain contentment with a world which, once doubted, became absurd.”

As a result of this, he tastes what he had previouly preached against, and becomes an adept at breaking the rules by partying, drinking alcohol and trying to have affairs with women with not much success. However, he does not go so far as to burn the bridges towards respectability. As he gets more and more involved with liberal practise, he starts showing public signs of sympathy towards liberal theorists as well, being ostracised as a consequence. When he is on the brink of tilting the scale wholly to the liberal side, coming to terms with the fact of risking his job and marriage, both of which are at stake at this point, his wife illness brings him back to the path of virtue; he embodies the parable of the prodigal son. His experience is not futile and empty, though, as it turns him into a more tolerant citizen and enables him to come to terms with the following generation.