Up to 1985, abortion was considered as a criminal activity in Spain. The only period of history when it was legal started with the Second Republic (1931), with geographical differences, as it was more liberally applied in more developed areas such as Catalonya. This period lasted until the end of the Second Republic and the defeat of the different factions fighting in the Spanish Civil War by General Franco in 1936 and the subsequent four decades of dictatorship.

During the Second Republic, it was Federica Montseny, an anarchist who was Minister of Health in the left-winged government in office, who recognized and legalized the right of women to have an abortion.

After that, during Franco’s dictatorship, 100,000 abortions a year would be practiced, although this is just an estimation, given the stigma it meant for women and their families and the secrecy that surrounded the issue. The most dramatic events are reflected in the following figures: from 200 hundred to 400 women died as a consequence of clandestine abortions in 1976, during the period known as “la transición democrática” (democratic transition after Franco’s government; he was already dead by then). The upper classes resorted to travelling to London. Here in Spain it was illegal to have an abortion, and those who had one could be put to jail for 12 years. There weren’t anti-baby pills or condoms available; well, there were some sold in the black market, but apart from this, they weren’t available. As they couldn’t used those methods, they were usually faced with the aftermaths, and then, women had to resort on remedies such as throwing themselves out of windows, shoving a parsley stem/knitting needle/steel hanger up their vagina or have an internal rinse with bleach and detergents. Great fun, huh? I’ve actually met people who has done these things.

In 1985, after some years of “democracy” had gone by (and some deaths and imprisonments of women and doctors whose news form part of my childhood memories), the government legalized abortion again. There were three cases in which women could have an abortion:

-foetus malformations (up to 22 weeks)

The rest of cases were considered punible.

This law was subtituted by another in 2010 by Zapatero’s government. In this new law they don’t consider the three cases, but abortion is considered  a right without any doubt or condition up to the 14th week of pregnancy, 22 weeks if there were malformations or danger for the mother’s health and no limit if there were foetal anomalies which are incompatible with life. Also, young women aged 16 and 17 could have an abortion without having to ask their parents for permission.

Now, under Rajoy’s legislation the 2010 law is no longer valid, and Secretary of Justice Alberto Ruiz Gallardón has elaborated a law which brings women’s rights far beyond the 1985 law. In case of foetal anomalies which are incompatible with life, who have to deliver your baby to then watch it die before your eyes after your labour hours. The evaluation of danger for the mother’s health has to be done by independent doctors and young women can’t have an abortion without their parents permission.

We must now take into consideration that health-related issues are only one of the causes to have an abortion. 98% of abortions have more to do with economy, work, age or emotional issues. And we only have add up the crisis to this fact in order to build a time bomb…, once more.

There has been much talk here in Spain about the levels of poverty we are reaching. I am talking about the average citizen, or course, because as you must know, corruption in Spain stays mainly in the plain (and everywhere else) and euros in Spain stay mainly outside the country (they have a preferrence for Switzerland). Ana Botella, the former president Aznar’s wife (what a surprise, Cornelius Nepote) and mayor of Madrid (please do not miss her speech last year for the Olympics 2020, utterly ridiculous) decided to impose a fine which amounts to 1038 American Dollars (750 euros) on those who search in the rubbish. I think she has decided to take this measure to avoid a certain image which could affect investors’ decisions upon spending money in a ruined country. She wants us to look sleek and politically correct although it is only the political class who is taking the money. Oh, well… The Monarchy is taking the money too, I forgot, my apologies to the crown for forgetting their part in it. Both stink with corruption, stained with moral rubbish in which they feed. How dare they complain that the average citizen looks for food in the trash cans? Does it paint a poor image? 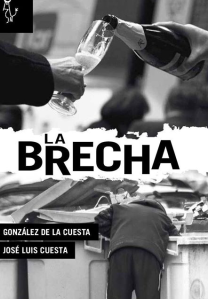 The fact is that every time I go shopping or do some errand lately, I see up to three different people in three different spots looking for things among the rubbish. Usually, they carry a neat little shopping trolley, one of those made of cloth with two little wheels that we see at supermarkets and they proceed to their searching. Is there anything wrong with this? Job opportunities are scarce, and there is a lot of still edible stuff in the cans next to supermarkets. Why haven’t they regulated on throwing away edible stuff when there are so many people in need?

This is the society of programmed obsolescence, our dear consumer-based society in which we are valued for the amount of stuff that we consume and we are expected to support society by keeping on buying and discarding material things. This means that the rubbish cans are packed with usable stuff and this is no recent issue. I have picked up interesting things from rubbish cans myself. Part of my clothes come from discards of others and they are as nice as they could be. And I’ve always liked the idea of buying second-hand clothes: less waste for the planet, less influence by the companies that play with a certain image of women, less concern about hundreds dying in a clothes factory in Bangladesh which collapses…

I guess this is considered marginal and belonging to the lumpen-proletariat, but it does have a dignity in it. More than politicians and aristocrats can say in this country.