For thousands of years, the American continent remained undisturbed by the presence of humanity. It was isolated from the migration of human tribes, as proved by the lack of fossil remains previous to those of the Homo Sapiens. The first humans arrived in America probably from Asia across the Bering Strait between 25,000-40,000 years ago. This would constitute the very first discovery of the continent.  The human tribes from Mongolia spread throughout the continent in the course of thousands of years and several distinct ancient American civilizations, each one with their own idiosyncrasies, were born as a result.

The next incursion of humans from other parts of the world took place in the 11th century AD. In the 9th century, Scandinavians from Norway occupied Iceland and in the 10th century, the Icelander Eric the Red discovered Greenland. Of course, he wasn´t the first human in Greenland, where he found a colony whose economy was based on livestock and the export of walrus ivory and falcons. Then, one of Eric the Red’s men called Biarni Heriulfson saw land to the West of Greenland around the year 986, and Eric the Red’s son Leif decided to explore it, reaching its coast in 1001. Leif spent a winter there, in Newfoundland, and then returned to Greenland. Around 1010-15, another Icelander, Thorfinn Karlsefni, together with a group of Eric the Red’s men, explored the coast of Newfoundland -known then as ‘Vinland the Good’- and attempted to settle there, spending two or three winters with the natives. But the natives proved to be quite hostile and the Norsemen returned to Greenland and made no further attempts. Again, the American coast remained undisturbed until 1492. 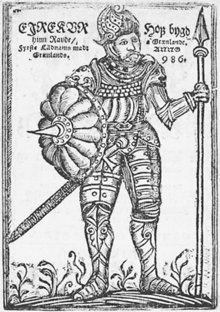 Driven by social convention, people celebrate the discovery of America on the day Columbus reached the American coasts in 1492, but he didn´t really ‘discovered’ anything that hadn´t been discovered a long time ago. In the same celebratory mood, we could choose the fist option and establish a day 40,000 years ago to throw a commemorative party, or decide on Biarni Heriulfson’s sight of land in the year 986, or select Leif’s expedition in 1001 rather than Christopher Columbus’s arrival. The debate is open.

Source: A concise history of the American Republic, volume I.